The Washington State Office of Equity champions equity and justice for veterans and celebrates all veterans who shaped the state’s history and are instrumental to its future success. The make our state truly accessible to all, we advocate for ensuring that all veterans have  access to the opportunities, power, and resources they need to succeed and are welcomed, supported, and feel a sense of belonging when working in or seeking assistance from state agencies. 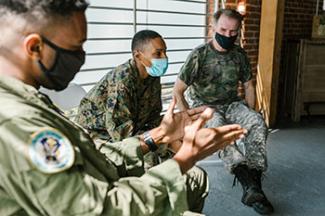 We count on the commitment, partnership, and support of veterans  – across the state, inside and outside of state government, - in the important work of dismantling the historic, systemic, power dynamics that oppress veterans, while building new systems and safeguards that advance representation and ensure that veterans  have access to participation in all aspects of society (such as, government, business, education) until each and every veteran in the state  flourishes and achieves their full potential.

In January 2010, Fort Lewis and McChord Air Force base began operating as Joint Base Lewis-McChord. JBLM is located between the cities of Tacoma and Olympia and has a population of 295,067. Washington state is also home to four Naval bases and an Air Force base in Eastern Washington. Almost 40,000 military retirees live in Washington state. Active duty members, veterans and their spouses face varying challenges in navigating state resources and finding employment. The Office of Equity recognizes these challenges and will work to support equitable access and resources to eliminate barriers.

The purpose of the armed forces, in the United States, is to protect the nation's citizens and territory from threats. However, our military does much more. Some examples of military missions include:

The military is also the nation's biggest group of international ambassadors. As such, there is a great deal of responsibility and respect to show to those service members and their contributions. The U.S. Armed Forces are made up of the six military branches: Air Force, Army, Coast Guard, Marine Corps, Navy and, most recently, Space Force. Each branch is headed by a civil servant ("Secretary") and a uniformed military officer ("Chief of Staff"), who is also a member of the Joint Chiefs of Staff. The President of the United States, who is the head of the Executive Branch, is also the Commander-in-Chief of the U.S. military. There are three general categories of military people: active duty (full-time soldiers and sailors), reserve and guard forces (usually work a civilian job but can be called to full-time military duty), and veterans and retirees (past members of the military). And of course, there are the millions of family members and friends of military members, past and present. The president can mobilize troops to a limited extent.

Washington state makes efforts to connect veterans and their family members to the benefits and services they earned through their military service and transition from service into civilian employment and business opportunities.

Active duty members, their spouses and retirees come to Washington state from across the United States and other countries. The intersectionality of their unique differences can present different barriers when it comes to equitable access.

Despite the varying experiences and identities, common equity issues that veterans experience include:

Who supports the troops? The troops support the troops. Clint Van Winkle