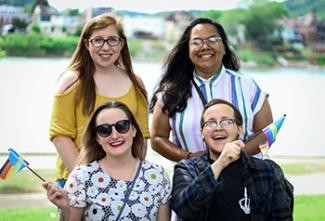 History was made in Washington state on June 19, 2015 with the first raising of the Pride Flag at the State Capitol. Gov. Inslee spoke at the event, and the flag was raised by Spencer Daniels and Ruben Garza, representatives of organizations serving older and younger LGBTQ+ community members, SAGE Olympia and PIZZA Klatch (Thurston Talk 6/19/2019). The Pride Flag has flown at the Capitol every year since in the month of June, when Washingtonians and others across the country celebrate Pride Month to raise awareness and honor the rights and dignity of those in the LGBTQ+ community.

Another historic moment in Washington history was the appointment of Judge Helen Whitener to the Washington State Supreme Court in April 2020. Judge Whitener is recognized for her work to raise awareness about race, advance justice and equity, champion diversity and mentor youth from underrepresented backgrounds into the legal profession (Medium.com 4/13/2020). Judge Whitener is the first Black woman justice and the second openly gay justice to serve on the Washington State Supreme Court (KNKX.org 4/13/2020).

Washington state also makes history with every law and policy passed to protect the civil rights of the LGBTQ+ community. Examples include: 2006 addition of protections based on sexual orientation and gender identity to RCW 49.60 Law Against Discrimination; 2013 passing of SB 6239 granting marriage equality; 2015 development of WAC to 162-32 to provide guidance on protections guaranteed under RCW 49.60 for people in the LGBTQ community; 2016 Directive of the Governor for LGBTQ Inclusion and Safe Places Initiative; and 2018 passing of SB 5722 to restrict the practice of conversion therapy.

Openness may not completely disarm prejudice, but it’s a good place to start. Jason Collins