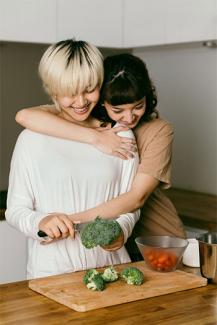 Asian, Native Hawaiian, and Pacific Islander communities struggled to define their social and cultural place in the larger American society. Generational tension, racism and economic concerns all worked to pull communities apart. But these communities, like other immigrant groups, responded creatively to hardship. Applying for U.S. citizenship, opening businesses, running for political office, or lobbying for social services are just some of the ways that Asian, Native Hawaiian, and Pacific Islanders have worked to create dynamic communities in Washington state.1

Washington State Commission on Asian Pacific American Affairs: Due to pervasive discrimination and barriers in accessing government services, a group of local Asian American and Pacific Islander community activists met with the Governor in 1971 to examine a broad range of issues facing the Asian American Pacific Islander population in the areas of employment, education, social services, community development, immigration and civil rights. In January 1972, Governor Dan Evans created The Governor’s Asian Advisory Council by executive order. On Feb. 26, 1974, the 43rd Washington State Legislature formally created The Washington State Commission on Asian American Affairs as a state agency. On April 17, 1995, Governor Mike Lowry signed a bill to change the Commission’s name to The State of Washington Commission on Asian Pacific American Affairs to include Pacific Islanders.2

May is Asian, Native Hawaiian, and Pacific Islander Month: In 1982, the Asian Pacific Directors Coalition was formed to advocate for ANHPI communities in the Greater Seattle area. APDC is comprised of over 40 executive directors, board presidents, and leaders from nonprofits, civil rights organizations, educational institutions, the private sector, and government. In 2002, APDC formed a subcommittee to organize the Asian Pacific Islander Heritage Month Celebration and joined Seattle Center Festál under the leadership of Alan ‘Al’ Sugiyama, a long-time community activist, first chairperson of APDC, and the first Asian American elected to the Board of Directors for Seattle Public Schools.3

It’s important to acknowledge and recognize the struggles that Asian Americans and Pacific Islanders have gone through, the model minority myth makes it seem like there are no struggles, but that’s not true at all.4 Jelena Lapuz

Without funding and research, urgent social problems among AAPI related to everything from health disparities and mental illness to poverty and crime are not even acknowledged, much less studied and addressed. Amy Yee