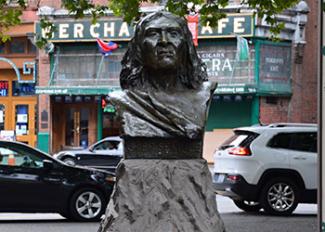 History matters. Not only does it show where we have been, it explains why things are the way they are. When it comes to building a more equitable and just world for everyone, everyday actions -- the large and the small -- matter. The Washington State Office of Equity honors the contributions of American Indian/Alaska Native people who, through their actions, made this state and nation a better place to live. We appreciate the everyday actions -- the large and the small -- American Indian/Alaska Native people take to live, love, and thrive in safety and authenticity.

One of the key shapers of Washington and Seattle history is Chief Si’ahl, also known as Chief Seattle. Read about Chief Si’ahl. Born around 1786 to Suquamish Chief Schweabe and a Duwamish mother, he delivered a stirring speech during the 1854 treaty negotiations with the governor of Washington Territory, one that continues to be recognized as one of the greatest statements ever made regarding the relationship between a people and the earth. Read Chief Si’ahl’s 1854 speech.

Seattle, one of Washington’s key cities, is named after him and a statue of him resides near the Space Needle in Seattle.

Tribal Canoe Journey is a cultural celebration in which hundreds of American Indian/Alaska Native nations from the coast of Alaska, British Columbia, Oregon, and Washington state travel from their home waters to a host Nation, stopping to visit different communities along the way. Every year a different tribe hosts the celebration. Read about Tribal Canoe Journey

A people without the knowledge of their past history, origin and culture is like a tree without roots. Marcus Garvey

In 1970 and 1971, when American Indian/Alaska Native activists climbed and then occupied Mount Rushmore to protest what they considered theft, illegal occupation and desecration of a spiritual site.

I’m on this road for the rest of my life. Dennis Banks, Ojibwe activist